As many of our fellow District 7570 Rotarians already know, the Rotary Club of Salem raised $51,000 over the last year for Rotary International’s Polio Eradication Project.  An integral part of the Club’s efforts involved our community by joining forces with the Salem High School Football team.

Our Club pledged $100 for every touchdown the team scored with a limit of $5,000.00.  At the end of the season, the Salem Rotarians went above the limit and contributed $5,600.00.  The Spartans scored  a lot of touchdowns!

To involve the community, after each touchdown scored, the $100 contribution were highlighted on the scoreboard and announced over the public address system.  Also, at halftime the contribution was noted on the ESPN radio broadcast.

This joint enterprise not only involves the Rotary Club of Salem, Salem High and the football team, but the Interact Club, all the fans of Salem football and is a true community event.  lt has also publicized the good works of Rotary and has led to unsolicited contributions to the Polio Eradication Project.

It has been so successful that the Rotary Club of Salem will renew the project and plan to pledge up to $7,000.00 for this season’s football campaign.  Go Spartans! 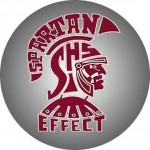