All 12 of the conference coaches thanked the members of the Rotary Club for their generosity and hard work sponsoring the conference tournament since 1981.  Since that time, over $500,000 in tournament proceeds have been distributed to charitable organizations in and around the Roanoke Valley. 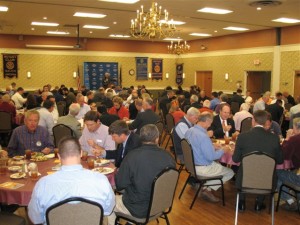 In the Spring of each year The Rotary Club of Salem honors ODAC student-athletes by presenting the Jostens Trophy and the Wooldridge Scholarship to a men’s and women’s basketball player exemplifying excellence in the classroom, on the playing court and in the community.

Next week the Club will be hosting the ODAC Women’s coaches.