admin Posted on October 24, 2014 Posted in Replay No Comments 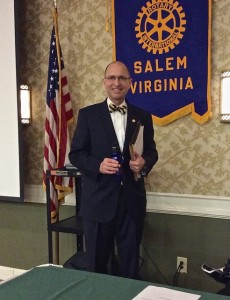 Roy Ferguson is the executive vice president of Bridgewater College. He graduated from the University of Virginia and received a law degree from William and Mary’s Marshall-Wythe School of Law.  Before joining Bridgewater in 2003, Ferguson practiced law for 20 years in Harrisonburg, Virginia.  He has been part of the College’s leadership team since he came to Bridgewater and served as interim president from 2012-2013. Ferguson oversees the offices of marketing and communications, athletics, campus police and safety, and institutional research.  He also serves as the College’s in-house legal counsel.

One of the main complaints lodged against American higher education is its ever-increasing cost.  Mr. Ferguson’s talk today focused on the significant costs incurred by schools in an effort to comply with the myriad governmental and other regulations imposed on these institutions.  Failure to meet these various requirements may have significant consequences, including loss of non-profit status and the payment of hefty fines.

Why so much regulation?  As Mr. Ferguson explained, after World War II, the federal government poured billions into education (most notably, investing in research and financial aid).  There are no free lunches.  With the infusion of these large sums, the government expects accountability, an expectation that has given rise to a complex and growing regulatory environment.  Today, schools must comply with regulations that apply to all businesses as well as those that apply to not-for-profit schools.  When a school receives money for a specific purpose, it must file reports and complete forms that indicate it has disbursed those funds in compliance with the stated purpose of the aid.  And the fourth category of regulation, which Mr. Ferguson described as where “the mischief occurs,” involves instances where funds are given but the funding really provides a vehicle to promote unrelated public policies (e.g., campus safety, privacy, alcohol use, diversity, and price of textbooks).  Here, many of the “regulations” are actually guidance or suggestions for schools.  But it is best simply to comply since if it fights the “suggestion,” the school will be investigated.

Mr.Ferguson cited an audit undertaken in 2011 by Hartwick College that undertook to identify the various government agencies and other associations that regulate Hartwick.  The audit also sought to identify the estimated amount of employee time spent on compliance and determine the direct and indirect costs associated with the activities.  Hardwick found that it is regulated by 28 federal agencies and departments, 15 state agencies, 4 local governments, 7 accrediting agencies, 3 athletic associations and other private organizations.  Hardwick must also comply with the requirements of a number of hospitals and medically-related organizations that the College is affiliated with for the nursing program.  Hardwick estimated that it spends about a quarter of a million dollars annually on salary costs, direct costs, and accreditation costs.

Ferguson told the group that the Congress has stepped in to help.  In 2013, it created the Task Force on Government Regulation of Higher Education, which was tasked with the job of creating a compliance calendar and providing recommendations to streamline the applicable federal regulations.

In conclusion, Mr. Ferguson acknowledged that historically colleges have failed to be pro-active in shaping their accountability system.  But, he continued, they are trying to make up for lost time and identified recent efforts in the areas of sexual assault and the imposition of a federal rating system.  He asked Rotarians to take a look at consumer information available on college websites.  That information provides a laundry list of disclosures schools must make to students and prospective students.  Ferguson also encouraged members to learn more about the regulatory pressures their alma maters are dealing with on a day-to-day basis and to consider what they might do in communicating with legislators (citing Congressman Goodlatte’s opposition to the proposed federal rating system).