admin Posted on October 23, 2014 Posted in Replay No Comments 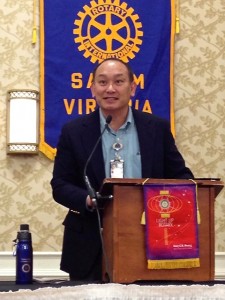 Today Dr. LaPuz provided a brief overview of the Department of Veterans Affairs (VA), the Salem VAMC and candidly shared his thoughts regarding the recent disclosures tarnishing the VA.  Dr. LaPuz outlined the roles of the various agencies comprising the Department of Veterans Affairs.  His speech focused primarily on the Veterans Health Administration (VHA).  The Salem VAMC is but one of 1,000 facilities service over 6,000,000 veterans.

Dr. LaPuz opened his comments by stating that… “When a public institution such as the VA fails to meet the expectations of the public it is but natural to reassess its relevance to our times.”  He assured us the VHA’s self-assesment had started with reports by senior administrators due in Washington by the end of next month.  Space does not allow enumerating the insights offered by Dr. LaPuz outlining the inherent differences between the management and structure of private vs. public healthcare service systems.  He  stated these differences not as excuses, but to better inform us of the challenges that confront any effort to reform public institutions.

Dr. LaPuz cited a report produced by a commission in the United Kingdom after a failure in their public healthcare system.  He shared the findings and how they might apply to correcting systemic issues inherent with the VHA.  All in all, the challenges to overcome in order to bring about significant changes are daunting.

Dr. LaPuz’s ending comments were eloquently given.  He spoke how any feeling of pessimism about the task at hand is overcome by his recollections of family and of soldiers who overcame adversity in war and by his recognition of the ongoing efforts of Salem VAMC staff to provide veterans a better quality of life.   Dr. LaPuz finished with a quote from Abraham Lincoln’s 2nd Inaugural Address which has been the motto of the VA since 1959.  It is a solemn reminder of President Lincoln’s promise “to care for him who shall have borne the battle and for his widow and his orphan” and of the VA’s commitment to care for those injured in our nation’s defense and the families of those killed in its service.

We thank Dr. LaPuz for at the conclusion of his presentation being better informed citizens.