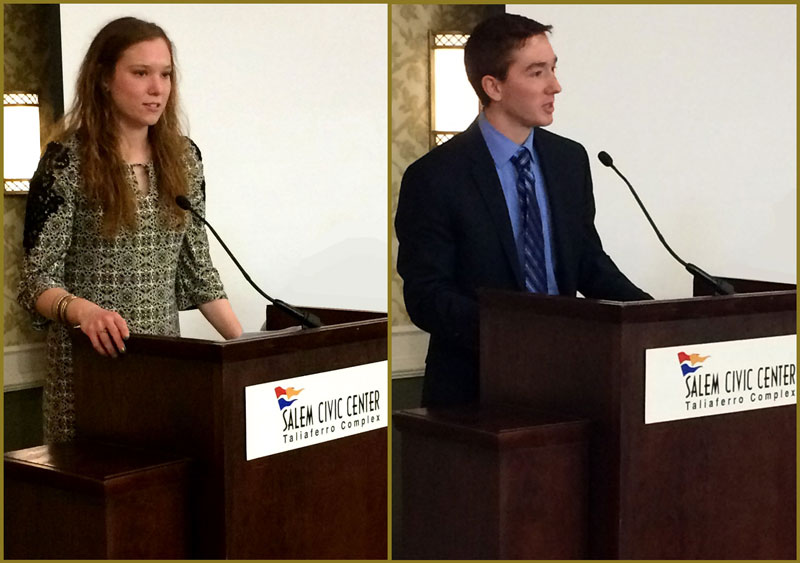 The Rotary Club of Salem presents the Finalists for the prestigious 2016 Jostens Trophy:

This club meeting hosted the annual presentation of the Jostens Finalists as it provided some memorable moments from the Jostens winners and their respective coaches, as well.
The Jostens Trophy is awarded to an outstanding NCAA Division III men’s and women’s basketball player who excels on the court, in the classroom, and in the community. This season marks the 19th presentation of the awards, with the inaugural trophies bestowed in 1998. The Rotary Club of Salem is responsible for the initial review of nominations and narrowed the collection of candidates over the past two weeks. The winners were chosen by a national selection committee that consists of college coaches, former athletes, college administrators and selected members of the media. The members of the national selection committee cast their votes based on three criteria: basketball ability, academic prowess and community service.
The meeting was hosted by Mark Henrickson and included a brief statement from Jostens’ Jaclyn Smith and proceeded with a video presentation of the 2016 Jostens finalists, Holly Denfeld from the Milwaukee School of Engineering and Trey Bardsley from Nebraska Wesleyan University.  The video consisted of highlights of game footage from both student athletes’ respective schedules this year, as Holly Denfeld displayed good low post maneuvers in the paint and Trey Bardsley exhibited some long distant shooting skills along with some creative drives to the basket.
After the video presentation, Coach Jessica Ott from Milwaukee School of Engineering gave a heartfelt introduction for Holly as she chronicled some of their shared experiences of Holly’s time playing for her. Coach Ott relayed to the Salem Rotarians and guests alike, how Holly helped her team at Milwaukee to achieve an 18 – 8 record this past year. She lead her conference in scoring with a 19.7 point per game average and a school record of 58.4% field goal percentage. In the classroom, Holly maintains a 4.00 cumulative GPA as an architectural engineering and construction management major. She is a 2 time Academic All-American. Holly also has logged many hours off the court for Habitat for Humanity, Milwaukee Empty Bowls, Kayla’s Crew, Sam’s Hope as well as the Milwaukee Heart Walk and Walk for Diabetes.
And likewise, Coach Dale Wellman from Nebraska Wesleyan, gave a spirited introduction for Trey Bardsley as Coach Wellman drew comparisons to Stephan Curry of the Golden State Warriors as Trey was a scoring threat anywhere inside the half court line. Trey averages around 29 points per game as he amassed a school-record 835 points which 138 shots were made from beyond the 3-point line. Like Holly, Trey shot more than 50% from the field while averaging just under 5 rebounds per game and 4 plus assists per game playing guard for NWU. Trey had a career best 55 points against a conference rival which included 16 of 29 shooting from the field, 11 for 18 beyond the arc and a perfect 12 for 12 from the foul line. Trey has maintained a 3.50 GPA as a business administration major. He also has earned a second team Academic All-American distinction.
Trey’s volunteering includes time spent with middle and high school aged students at the Lighthouse which provides academic support, enrichment and recreational activities to primarily low income students. Trey has spoken about the importance of staying in school to middle school students to help achieve their dreams as well as participation in Lend-A-Hand-to-Lincoln through NWU.
After both players delivered their remarks, the Woolridge Scholarship was presented.The Wooldridge Scholarship is a $1,000 donation which was presented in the name of the winner to his/her institution. The scholarship was named after Dan Wooldridge, a Salem Rotarian and retired Commissioner of the Old Dominion Athletic Conference, as a way of honoring him for his long-time dedication to Division III athletics.
After the scholarships were presented, both Holly and Trey had photo opportunities as they held the Jostens Trophy as the meeting was adjourned by President Tommy Barber. 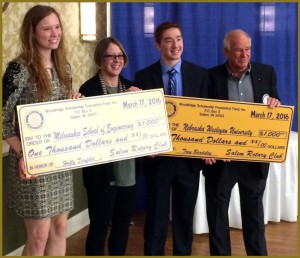 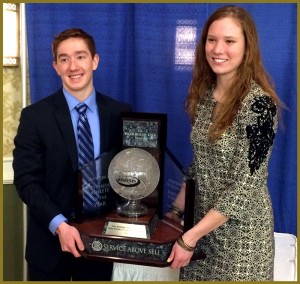