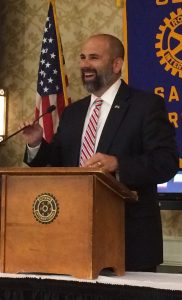 Introduced as a partner at Gentry Locke Rakes and Moore, Delegate Greg Habeeb discussed his role as well as an update of the Virginia House of Delegates as he represents the 8th District.

Delegate Habeeb covered a host of subjects during his talk with the Rotary Club of Salem from education, health care to convicted felons receiving their rights after serving out their sentences and fulfilling specific requirements as well as economic development.

Delegate Habeeb started off with the topic of budget as we reached a record 100 billion dollar budget featuring a pay raise for state employees and focusing spending on higher education in effort to keep tuitions from rising.

From the subject of budget, Mr. Habeeb spoke about newly appointed judges, primarily Virginia Supreme Court Judges, with some new appointments being made in this office.

Also covered was economic development with a specific program that Delegate Habeeb highlighted named Go Virginia which will have a regional board that can identify long term economic development initiatives and receive funding from a state panel which is a huge step to connect the Roanoke Valley with the New River Valley.

One economic project happening in Botetourt County is the new Elmore facility, a high end automotive parts factory with the creation of 350 jobs featuring a state-of-the-art robotics facility which will employ students from VWCC which has a curriculum beneficial to Elmore which turned out to be an incentive for them to choose this area.

The program moved to mental health as Catawba Hospital was described as a critical part of mental health care in the region and the need to support it financially which the State Assembly decided to fund.

Then Delegate Habeeb turned to education as was discussed about a partnership with Salem School Superintendent Alan Siebert to quantify students performance gains with the use of SOL’s.

At times, larger increases in student’s scores are more representative than consistent scores to be a more accurate metric of effectiveness.

The pipeline project was brought up by Mr. Habeeb as 3 of the 4 jurisdictions in his district are part of the pipeline issue as a crucial concern is the federal interest in pipeline safety in the affected areas.

Then the 2nd Amendment rights was presented as gun shows will have a law enforcement presence with the Virginia State Police that can do voluntary background checks on site.

Also, the Governor’s Restoration of Rights which the Governor has attempted to restore the voting rights of convicted felons who have served their time and met probation requirements.

As a rule of law, the Governor can restore rights of specific felons, in the Commonwealth, at their discretion.

Delegate Habeeb felt that non-violent felons should have a faster track to have their rights restored.

Mr. Habeeb exhibited that there are some potential loopholes that may leave it open to some convicted felons, while unknowingly to the Commonwealth of Virginia, serving in prison out of state, could possibly apply to vote via write-in ballot that had their voting rights restored.

Greg reported the media will be picking up this issue with a focus on different circumstances and possibilities.

Delegate Habeeb said that he feels more confident in his abilities to govern as he felt term limits are not merited at this time as he feels that he has been learning by his cumulative experience from serving the 8th District.

Delegate Habeeb answered some questions from Rotarians and President Barber requested Lynn Lautenschlager to close the meeting with the 4 way test.