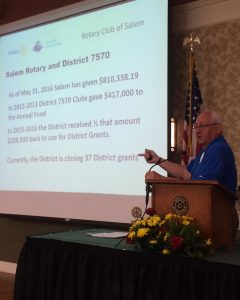 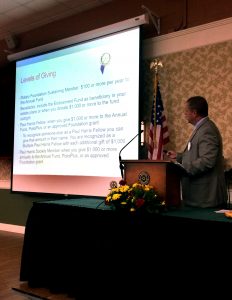 “How The Rotary Foundation Fits into Rotary” was Bob Keely’s presentation to the Rotary Club of Salem as he outlined how this functioned within our club and its relationship with Rotary International. Bob listed how we fund our different projects through the club’s regular fundraisers which included Olde Salem Days, ODAC Tournament and Star BBQ to name a few. Bob also mentioned personal contributions to The Rotary Foundation as well as Foundation Grants as additional sources.

Bob went on to define what is The Rotary Foundation. He defined it as as 503.C3 being a charitable organization/not for profit as well as reminding the club that we are part of Rotary International which has 1,227,710 members including 35,188 clubs in 206 countries. Bob also educated the club how The Rotary Foundation has evolved as he conveyed that at the 1917 Convention, RI Pres Arch Klump proposed a foundation to be formed to “do good in the world”. The Convention surplus was $26.50 which was used to start The Rotary Foundation. He went on to tell us on January 27, 1947, Rotary founder Paul Harris had passed away and as a memorial, the Paul Harris Fellow was implemented. In May of 1968, TRF Trustees made the decision where as a PHF would contribute $100 and become a PHF Sustaining Member. In 1970, the requirement of being a PHF was dropped and anyone could contribute $100 amount has not changed. If adjusted for inflation that amount would be about $685 per year. Bob shared other Foundation Facts as the Salem Club has given $810,338.19. Bob had a call to action as asking the question “What can I do?” as he communicated that we are short of the annual fund goal of $28,055 but our total Foundation contribution including Polio Plus is $31,425. He said it is possible to make an additional contribution if anyone wanted to.

Bob wrapped up his presentation and handed it over to Tom Bowers who presented the Paul Harris.

Tom started his presentation with a story of an estate that noticed The Rotary Club of Salem’s website and the estate had in their possession, 2 Paul Harris Medals that they wanted to donate back to the club. The donator was actually from Salem, Oregon as they had thought our club was in that region which provided for an amusing cross-up. Tom jumped right on in as he displayed the different levels of giving.

The baseline for a sustaining member is $100 and can be more. Benefactor status can happen if you include the Endowment Fund as a beneficiary in your estate plans or when you donate a $1000 outright. A Paul Harris Fellow award is granted when one gives $1000 to the Annual Fund, PolioPlus or an approved Foundation grant.

Also, Tom displayed the different donor levels of the PHF from the one sapphire pin at the $2000 level to the three ruby pin at $9,000. Bequest Society Member status is when you give $10,000 or more via your estate plans as well as Major Donor level is when you attain a level of $10,000 donation which entitles the Donor to a Crystal Recognition piece and a lapel pin or pendant. Tom also pointed out that Foundation Recognition points were also available and reflects points that you have accumulated through personal outright giving to the Foundation and can be transferred to other individuals for Paul Harris Fellow recognition.

Tom summed up his presentation to point out the ability to find recognition amounts and points through Rotary.org as you login and finding My Rotary and your profile and then Donor History Report x2.