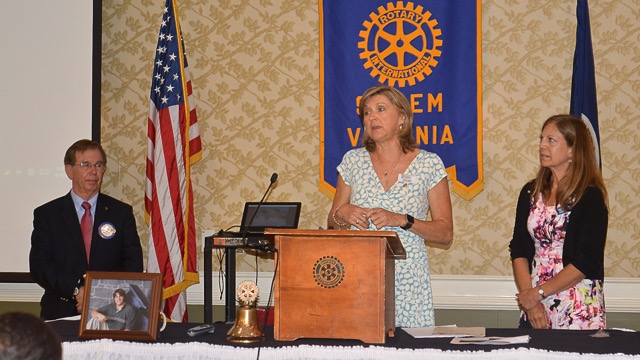 Our speakers to day were Nancy Hans and Janine Underwood on the topic of the “Opiates/Heroin Crisis in the Roanoke Valley”.

Nancy Hans is Executive Director of the Prevention Council of Roanoke County.  Ms. Hans addressed the Club last year on issues regarding the legalization of marijuana in the state of Virginia.  Today Ms. Hans spoke of the country losing a generation of our young, which coincided with the rapid growth nationally of prescription drug prescriptions, specifically to the illegal trafficking of opioids used in pain management.  And, in particular, fentanyl which when mixed with heroin is tantamount to a death sentence for the user.  129 deaths occur nationally due to drug over doses. Ms. Hans recognized Club member Tom Bowers for heading up the Heroin Task Force in the Roanoke Valley.

Janine Underwood is a fellow Rotarian. Her story of how she was drawn to Rotary is a gripping one. Ms. Underwood lost her son to drug addiction. It was a lonely war with victories and setbacks which tragically ended with the death of her son from an overdose of heroin laced with fentanyl.  In her grief she came upon an article in the Rotarian magazine which told of the threat posed to the public by the same circumstance which took her son. She was no longer alone in her grief and now had an avenue to rejoin the fight so others would not have to suffer her loss. Ms. Underwood is now a leader of the Rotary Club of Roanoke.

We were all moved to hear her story.  An important message shared by Nancy and Janine is to talk to your children, especially about family history that can provide examples of what might befall them.

For more information visit the Prevention Council of Roanoke County and RAYSAC websites.