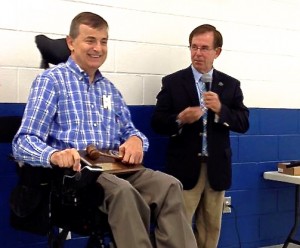 Today the Rotary Club of Salem marked the 65th year of Club Presidents transitioning from one term to another.  Dr. Bertram Spetzler (L) became Past Club President  and Tommy Barber (R) began his term as our Club President.  Each year a new Rotary theme lends to a revived call to service and energizes each new Club President to follow the lead of Rotary International’s current President (during July-August 2015 – view video on home page of RI President K. R. Ravindran address “Be a gift to the world” theme).

President Tommy spoke of new Club projects being initiated this Rotary year such as the Little Free Libraries along with others in the works.  He also recognized our Club’s accomplishments attained during Past Presidents Bert term.  The success of the “This Close” End Polio Now campaign being the crowning achievement.

Our President helped us to better understand the new Rotary theme “Be a gift to the world”.  Each color in the theme graphic represents and an area of activity for Rotary around the world and of concern for the Rotary Club of Salem.

Green – for building common ties between the people of the world
Orange – for the fight against disease
Blue – for efforts to provide potable water to all people
Pink – for improving the health and care of the new born and their mothers.
Yellow – to eliminate illiteracy and foster education for all
Purple – to strive to establish true world peace

President Tommy reflected on how Rotary International’s theme strongly paralleled the focus of our Club’s activities.  A point of emphasis in our new Club President’s address was that he wished Club members are fulfilled in their quest to “Be a gift to the world”. 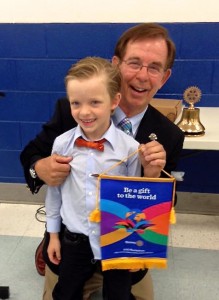