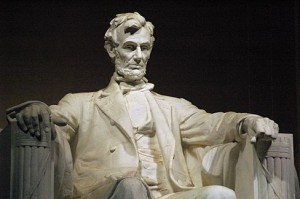 This year the nation observes the 150th anniversary of President Abraham Lincoln’s death.  Today we are fortunate to have Gary Crawford, a lifetime member of the Lincoln Forum, to speak about the “Assassination of Abraham Lincoln”.  In less than one-half hour Mr. Crawford words painted a very human picture of one of our most revered Presidents.

Crawford shared three principles he applies in the study of history.
1.)  Always use the contemporary standards of the time when evaluating historical figures, keep things in perspective.
2.)  Don’t make gods out of your heroes. You rob your hero of their humanity and you deny yourself kinship with your hero.
3.)  The simplest explanation of events usually works best.

From Lincoln’s lonely, “base born” childhood, uneducated and penniless at the age of 21 he left his home and moved to Illinois.  Self-educated, in less that two years he was a candidate for the state legislature.  He lost ran again and won.  He taught himself the law and became a lawyer which advanced his rapid rise to national prominence and the Presidency.  Abraham Lincoln’s Presidency defined him and the Civil War defined his Presidency.

Lincoln’s use of humor helped to characterize a complicated man.  Crawford quoted Shelby Foote “the Civil War was the aftermath of all that we had been as a Nation and that all we would become was the result of it.”  Crawford outlined the myriad of problems which immediately confronted Lincoln upon taking office.  In a brief time Crawford outlined the issues and how Lincoln met them head on.  The Gettysburg Address marked the moment when the South would first start to plot against Lincoln.  Not to assassinate but at first to kidnap him.  John Wilkes Booth was the lead conspirator from the outset which ended in an ambitious plot to kill the President, Vice-President and Secretary of State.  The only fatal casualty was President Lincoln.

Mr Crawford finished his edifying speech with references back to the Battle of Gettysburg and the Vietnam Memorial in Washington, D.C.  Approximately the same number of Americans died at the Battle of Gettysburg as died in the Vietnam War.  President Lincoln was among the 620,000 Americans who died in the Civil War.  We are grateful to Mr. Crawford’s for sharing his knowledge of our country’s history.