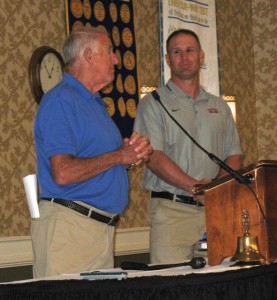 It’s the time of year when we get “coached up” on the latest NCAA rule changes and an update on what to expect from our Salem Spartans football team.  Club member Dan Wooldridge recently described as “Commissioner, Referee, Sports Ambassador” and Coach Stephen Magenbauer went over the X’s & O’s of the coming ACC and Salem High School football season.

Dan Wooldridge  reviewed the new  NCAA rules for the 2015 college football season, and there are a couple that could have a real impact on the game.  You know that pushing and pulling in piles after a fumble?  That would result in a 15-yard unsportsmanlike call.  If a helmet comes off a defensive player in the final minute of the half, there’s a 10-second runoff, and that could be huge at the end of the game.

The rules are listed below, via NCAA release.

• An eight-person officiating system will be allowed if a conference or school chooses. A center judge was used experimentally in several conferences during the past two seasons. The benefits of having the extra official include getting the ball spotted more efficiently and detecting holding and hands-to-the-face penalties.
• A 15-yard unsportsmanlike foul will be called on players who push or pull opponents off piles — for example, after fumbles
• If a helmet comes off a defensive player in the final minute of a half, 10 seconds will be run off the game clock, and the play clock will be set at 40 seconds. Previously, the play clock was set to 25 seconds.
• Officials will return to giving teams an initial sideline warning when their personnel move out of the designated team bench area.
• Officials will treat illegal equipment issues — such as jerseys tucked under the shoulder pads or exposed back pads — by making the player leave the field for at least one play. The equipment must be corrected for the player to return to the game. The player may remain in the game if his team takes a timeout to correct the equipment issue.
• Instant replay reviews will be allowed to see if a kicking team player blocked the receiving team before the ball traveled 10 yards on onside-kick plays.
• Teams must be provided at least 22 minutes prior to kickoff for pregame warm-ups. Teams may mutually agree to shorten this time period.
• If the play clock runs to 25 seconds before the ball is ready for play, officials will reset the clock to 40 seconds. Previously, the play clock was reset when it reached 20 seconds.
• Based on research findings of the National Football League, non-standard/overbuilt facemasks will be prohibited. 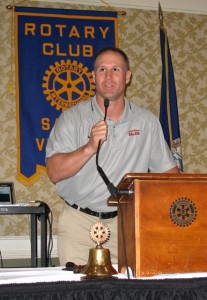 Salem Spartans Coach Stephen Magenbauer reviewed the prospects for his 2015 team.  A mixture of upper and younger class players meshing together to again challenge for another championship season.   The prospects for a sound running game apparently proved valid in the Spartan’s first game of the season.  The Spartans beat Amherst 45 -12 and rank high in the first in season Timesland rankings.

The Spartans and our Club will continue to team against polio this coming season.  To learn results of last year’s collaboration click here.
buy Propranolol