Member News in The Rotarian – August 2013 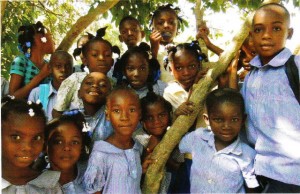 In 1997,Tom Fame visited Haiti for the first time. But after serving on several medical missions, Fame, an allergist, became frustrated. “They didn’t ever change anything,” he says.  A member of the Rotary Club of Salem, Va., USA, Fame concluded that the way to make a difference was to focus on one place. “I heard that the Catholic Diocese of Richmond had a twinning program in Haiti,” he explains.”You build a relationship with a community.

“Thats what led him to rural Cabestor Valley.  Working with his parish, Fame headed up the construction of three schools, serving about 1,000 students.  When he learned that many kids were not eating regular meals, he added a lunch program.  When the schools struggled to pay the teachers, he initiated an endowment to fund their salaries.  His club has raised $6,000, and members have donated an additional $15,000, for a major water project that captures spring water, which gets pumped to four mountainside reservoirs and is then gravity fed to a network of stations serving 3,000 people.

He was surveying the project site when he noticed a group of schoolchildren watching him and snapped a picture.  “I was looking at the construction of the water project, and they were all looking at me,” he chuckles.