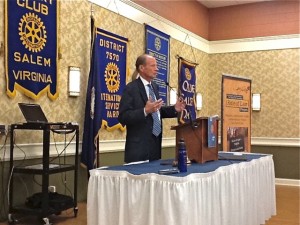 Quoting Club member Dr. H. Alan Seibert… “Virginia students are very good at reciting the branches of government, checks and balances, etc. but don’t have as good a handle on why we have laws in the first place.

In partial response to this, and thanks to the vision of Salem native G. Michael Pace, Jr., founder of the Rule of Law Project, Andrew Lewis Middle School was one of the first schools in the Commonwealth to participate in this important initiative.

“Teach the children so it will not be necessary to teach the adults.”
– Abraham Lincoln

Only through education can the rule of law be broadly understood as the basis for a free and open society, which requires transparency and active citizen participation to ensure equal treatment and access to justice for all people.

Since its inception in 2008, the Rule of Law Project has gained international interest, as developing nations realize that they need to establish the Rule of Law before they can hope to do much of anything else.  The Center for Teaching the Rule of Law is a web-based resource and training center for teaching the rule of law on a global scale.  Its purpose is to change fundamentally the way the rule of law is taught and understood.  It must become known as the first rung on the ladder of understanding democratic ideals, principles and institutions.

The Center’s definition of the rule of law contains the ideals that must exist for democratic principles to work:

– Governments and their officials are bound by the law,
– Citizens are actively engaged in making laws that govern them,
– Laws are fairly and equally applied to everyone, and
– Citizens agree to obey the law