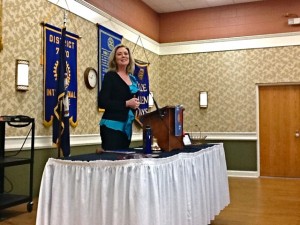 Nancy Stafford proved to be a charming and very interesting speaker.  She shared with us how her upbringing and faith supported her on the path she chose after being named Miss Florida and graduating from the University of Florida with a degree in journalism.  She became a top model and went onto a sucessful acting career with roles in Matlock, St. Elsewhere, Sidekicks and The Doctors to name a few.  Ms. Stafford’s off-screen accomplishments are many including public speaking and as an author.

Ms. Stafford spoke of her father’s battle against polio and told us of her appreciation of Rotary’s efforts to eradicate the disease worldwide.  Through her experiences bringing aid to children in Haiti after the 2010 earthquake, she expressed empathy with Dr. Tom Fame’s guest Father Rene Blot, who is an integral part of the ongoing success of the Clean Water Project in Haiti.

Ms. Stafford life changed 10 years ago when she learned of the work being done by 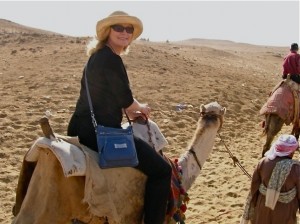 SAT-7.  SAT-7 satellite broadcasts provide quality Christian television programming directly into millions of homes throughout the Middle East and North Africa without censorship and broadcast interference by local governments.  SAT-7 airs 5 channels in Arabic, Farsi, and Turkish languages to a known audience of over 15 million viewers.  Of particular concern to Ms. Stafford is the plight of women in the Middle East and North Africa, which is championed by SAT-7 through Women of Hope.