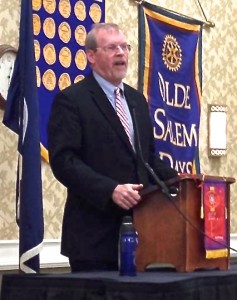 With elections around the corner and a myriad of issues concerning voters, Congressman Griffith thought a prepared speech might not cover all our areas of interest, so he provided as much time for questions and answers.

Rep. Griffith’s only prepared remarks were to inform us of his and Congressman Phil Roe, M.D. (R-TN) recent participation at VATech in the 21st Century Cures Health Care Roundtable.  Rep. Griffith hosted medical experts in a roundtable discussion on how to accelerate the pace of new promising cures and treatments for patients.  Topics include the Food and Drug Administration’s Drug Approval Process, clinical trials, telemedicine, mobile health apps, personalized medicine, and medical research and funding.  A timely discussion in light of the recent Ebola outbreak.

Rep. Griffith then opened the floor to questions from Club members.  Due to limited space, a few of the questions and a brief summary of Congressman Griffith’s responses follow.

Comment on the greatest discrepancy in wealth in our country since the 1920’s… In a free society there are always going to those who achieve more than others through their own diligence.  Regulations and tax disincentives should not be barriers to an individuals success.  There should be a level playing field for all citizens and in the axiom that a rising economic tide raises all boats. There is a  need for regulation, but government’s role should be as a facilitator and encourage the creation of a better environment for entrepreneurship.

How would you describe the atmosphere in Congress, as congenial or partisan?…  There are 435 members of Congress with demands from constituents and modern media cycles are only on the floor or in Washington just 2-3 days a week.  This offers members of Congress little time as in the past to get to know each other as people. It is even hard to get to know all the members of Congress by name. Best chance to build relationships is with fellow members of committees.  Not getting to know each other diminishes opportunities to find common ground or build compromises.  Nonetheless, in a few cases it just wouldn’t help.

What difference would a Republican majority in the Senate make?…  Biggest difference maker would be to change some the rules of the Senate.  Rep. Griffith believes that the modern filibuster closure rule  is damaging our Republic.  You shouldn’t have to have in a democratic republican form of government sixty votes (60%) to pass bill.  Rather than a filibuster today a Senator can just put a “hold” on a bill to keep from debate on the floor (there over 350 bills in this state today).  And the hold is secret.  The bill could have been passed in House in a bipartisan manner it makes no difference.

What is being done to speed up the care provided to our veterans?…  The house has authorized that if a veteran cannot get treated by a certain amount of time they are able to seek treatment from private sector health services.  Also there is a need to streamline the paperwork needed to acquire treatment. The Congressman’s office can serves as an ombudsman to help expedite treatment.  For more on health related issues click here.

What is your take on the future of social security?…  Social Security can be fixed. One of the ideas is to simply have people in their mid-50’s or younger wait two years longer to retire, but this solution doesn’t address Medicare issues.  It also doesn’t address those in physically demanding jobs that would be unduly burdened by a delay in the retirement age.  Tweaks are needed, but it has been a politically dangerous topic to take on.  Medicare is a tougher budget issue with which we must deal.

How do you feel about ISIS?… Are we at war?…  The 2001-2002 Authorization of Force is not sufficient for the President to commit the U.S. to war with ISIS.  The President should come to Congress to workout the specifics regarding the terms of engagement.  The Congressman stressed his belief that the Muslim countries in the region should be strongly encouraged to put “boots on the ground” against ISIS.  In the end, this is a religious war between Muslims with American involvement being twisted against our interest no matter how we might be engaged.  The potential of the establishment of a caliphate is a greater danger to Jordan, Turkey, and Saudi Arabia than the U.S.  Encouraging Islamic nations to be engaged does not diminish the possibility of an act of terror against the U.S. or negate need for U.S. participation in the war but does focuses on whom should be at the point against ISIS.

Club members appreciated the forthright manner and thorough response to our questions.

To read more about the Congressman’s stance on the issue click here.