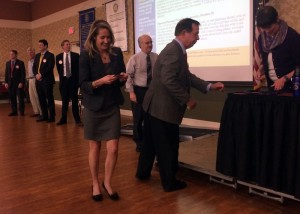 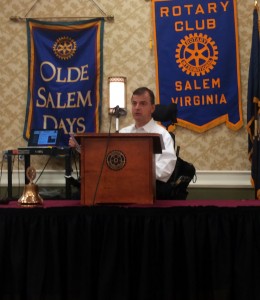 The Rotary Club of Salem celebrated World Polio Day by participating in the “The World’s Greatest Meal” program. Past President Dr. Bert Spetzler presented the program. Bert updated the club that there were only 51 cases of polio reported  worldwide. Also, Bert relayed that Type 1 polio virus is the only polio virus that remains today. As of October 15, 2015, the vaccine is down to 15 cents per dose and with our District’s contribution of $750,000, it would be possible for 5 million children to receive the vaccine. 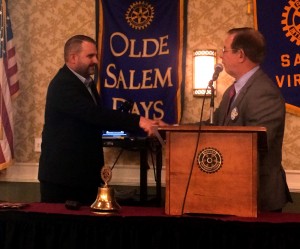 The Guest Speaker at our weekly meeting was Adam Bruce from Yokohama. Adam spoke about the growth and relationship between the community and Salem’s Yokohama plant as he has been with Yokohama since 1994.  Adam was born in Radford, Virginia as well as attended Radford University and has 2 college age children and lives in Hardy Virginia. He is also 2015 chairman of the Salem-Roanoke Valley Chamber of Commerce. Mr. Bruce started his talk with the simple axiom that tires are simple as they are round and black. He discussed all product lines that Yokohama produces which primarily features tires to Yokohama’s anti-seismic products that help buildings become safer and minimizes damage during and earthquake. The average wage for an hourly worker at Yokohama is around $25 per hour according to Mr. Bruce as he also stated that a new employee takes 5 years to work up to full pay. Yokohama employs over 21,000 people worldwide as the tire business represents around 74% of their total business. They also produce marine hoses, anti-waterproof products, golf supplies to name a few. Adam mentioned the head office of Yokohama is in Tokyo, Japan. Adam wrapped up his presentation that the credo at Yokohama is “Win the Race”. The Rotary Club of Salem expresses their sincere appreciation to Mr. Adam Bruce for his informative presentation.
reviews of mspy software