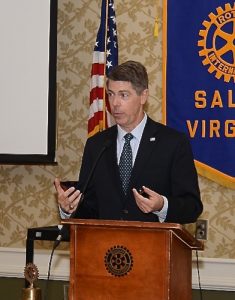 Roanoke City Manager Christopher P. Morrill was the final in a series of programs on economic development and community building in the Roanoke Valley.  Mr. Morrill has been Roanoke City Manager since 2010.  His first speaking engagement was here at our Club and he joked that he must have been pretty bad for us to wait this long to ask him back.  On the contrary, Mr. Morrill could easily have stated that he has just been too busy.  No other local government can so readily reflect the successful outcomes from the changes in approach to economic development mentioned in this series of programs than the City of Roanoke.

As our other speakers emphasized Mr. Morrill believes a holistic point of view is necessary to “drive local GDP growth”.  A comprehension that all facets of a community must be nurtured to promote successful outcomes for each community.  This concept as importantly applies to adjoining governments understanding that they are interconnected and are an important part of facilitating each others community and economic development.  All our speakers cited the Roanoke Regional Partnership, Roanoke Outside and the Wood Haven Road Project as  excellent examples of Roanoke Valley cooperation.  For the City of Roanoke and the Roanoke Valley an inter-regional partnership between Carilion Health Systems and Virginia Tech is the crown jewel of valley economic development.  The Roanoke Innovation Corridor initiative hopes to leverage the economic benefits provided by this partnership.

Phrases such as “Community Vitality”, the extent citizens feel welcome and an attachment to where they live; “Social Offerings”, opportunity for people to get together; “Community Design”, architecture and infrastructure; all help define  successful urban economic development projects in Roanoke.   The revitalization in downtown around Market Square, Elmwood Park, new hotel, remodeling of Berglund Center, expansion of Greenways, increase of residential living in downtown.  And it does not stop there, as Mr. Morrill stated you have to also focus on the basics.

Governments cannot ignore their essential responsibility to its citizens.  Education – High school graduations rates have increased from 59% to 87%, Security – crime has decreased 48%, Safety – the fire department has earned prestigious national accreditation, General Welfare – play grounds have been upgraded and residential neighborhoods revamped.  On providing information and effectively communicating with the public Roanoke City has received national recognition for its use of social media.

In today’s competitive landscape we must have all cylinders firing to power economic development.  The message from all our speakers is that our region is doing its best to have all cylinders running cleanly and in sync.  The achievements of the last several years are noteworthy and we thank all our speakers for their role in improving the quality of life in our region.

The Right Team at The Right Time – City of Roanoke Communications

You can also view last two Club Meeting Rotary Recaps listed under Recent Posts or do keyword searches for more information related to this excellent series of programs.  Thank you Program Committee!