The twelve coaches joined the Rotary Club of Salem for lunch after the media day and participated in panel discussions. Coaches took the stage six at a time and fielded questions from Assistant Commissioner J.J. Nekoloff. Roanoke and Randolph both have new head coaches for the 2016-2017 season with former Randolph coach Clay Nunley taking over at Roanoke and Pete Hamilton getting his first head coaching job at Randolph.

No stranger to the ODAC, Nunley comes to Salem after nine seasons at the helm of the men’s basketball program at Randolph College, where he has guided the WildCats since the program’s inception in 2007. Nunley becomes just the fifth head coach of the Roanoke program since 1967 and follows the likes of RC Hall of Famers Charlie Moir (1967-73), Ed Green (1977-89) and Page Moir (1989-2016), the all-time winningest coach who stepped down in March after 428 victories.

Hamilton (Randolph 2011) was part of the first class of Randolph College after the institution went coeducational. He was a member of the first WildCat men’s basketball team that took the floor in 2007-2008. He was part of many firsts for the basketball program: the first win, the first conference win, the first four-year member Senior Day, and the first-ever appearance in the ODAC Championship. Hamilton’s name can still be found in the top-10 in almost every category in the program’s record books, which includes the record for most three-point field goals in a career.

The coaches appreciated the Salem Rotary club for hosting the season ending ODAC tournament at the Salem Civic Center. All the coach commented on the strength of the ODAC and anticipated the competition to be better than ever. Shenandoah coach Rob Pryor described the ODAC as “unforgiving”. The Rotary Club of Salem looks forward to hosting the ODAC tournament in February of 2017. 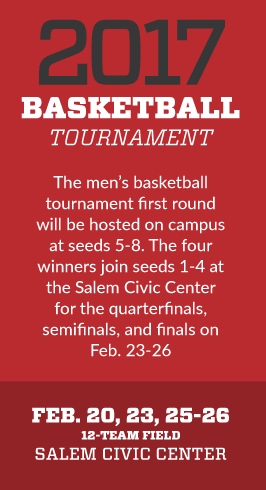 Special thanks to Joe Foley for this Rotary Recap and to Robert Dementi for his photographic skills!