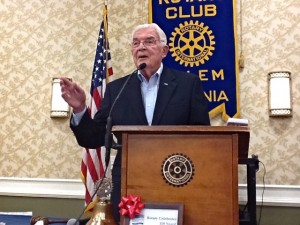 Mr. William F. Hahn first comments to the Club were to note that this is what happens to folks who meet Bill and June Long while on a cruise.  Mr. Hahn’s experiences during World War II, however, had already provided him ample opportunity to become accustomed to the perils of travel on and above the surface of oceans.

During World War II, Lt. William F. Hahn, a Navy pilot, flew carrier-based fighter planes on missions over Iwo Jima, Okinawa, Tokyo and Kyushu. He lucidly shared personal remembrances of his fellow servicemen and recalled instances from his combat experience.  The Club is now more familiar with the not so subtle differences between “moderate” and “heavy” anti-aircraft fire; issues surrounding making a “dead stick” emergency landing on the ocean surface; how after a successful ditching he was rescued before drifting to a nearby Japanese occupied island; of air engagements with Kamikaze attacking naval vessels; and more.

Mr. Hahn was awarded the Distinguished Flying Cross by the President of the United States for his “heroism and extraordinary achievement” piloting in Fighting Squadron Eighty Two, which was attached to the U.S.S. Bennington. It is also noted that Hahn’s “skill and devotion to duty were in keeping with the highest traditions of the United States Naval Service.”

We thank Mr. Hahn for his service to country and allowing us a first-hand glimpse of our nation’s history.