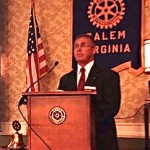 With our meeting falling between Memorial Day and the anniversary of the WWII D-Day invasion of Fortress Europe, it was fitting to have the upcoming 70th Anniversary of D-Day be the topic of our program.  We had the pleasure of having as our speaker Martin F. Leamy, a decorated veteran, who is the Site Facilities Manager of The National D-Day Memorial.

Mr. Leamy gave the membership a quick history of the D-Day Memorial and told the tragic story of The Bedford Boys, which prompted Congress to approve the location of the National D-Day Memorial in Bedford Virginia.

We were taken on a tour of the site.  Perhaps the most striking features found on the grounds of the Memorial are the sculptures created by Jim Brothers.  Mr. Leamy shared that the sculptor used incredible attention to detail to such an extent that each soldier’s uniform reflected the variances of how each combat group outfitted themselves for battle.  It is possible that to many the attention to detail largely goes unnoticed due to the powerful human emotions evoked by each piece of art.  Mr. Brothers twelfth and final contribution to the site titled “Homage” will be dedicated as part of the 70th Anniversary observances.

The 70 Anniversary events are focused to honor the memory of the veterans who participated in the events of that day.  Organizers are anticipating large crowds and much planning has gone into routing traffic around Bedford and use of satellite parking with shuttles to minimize bottlenecks.  Please access this link to get the specifics about the events planned over the weekend and parking arrangements.  The organizers have done a great job in planning the commemoration of this historical event.

The Memorial is supported by contributions to the National D-Day Memorial Foundation a 501(c)(3) not-for profit organization.