Ed Posted on May 4, 2014 Posted in Community Service News, Replay 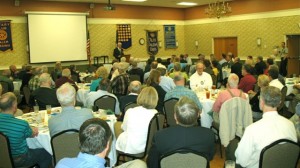 Good afternoon, I am Skip Lautenschlager and I have the distinct pleasure of introducing our Outstanding Citizen recipient. I suppose I was chosen because I have known and worked with him forever it seems.

Before I begin the introduction I would like to acknowledge
some special guests,
• Sarina Trompeter, Judge Trompeter’s wife.
• Jason Trompeter, his son, and his wife, Pam.
• Carolyn Robbins, the Clerk of the General District Courts for
the City of Salem.

I also want to thank Mark Henrickson and the members of his committee for the wonderful job they did in selecting this year’s Outstanding Citizen Award recipient.

Philip Trompeter is a Judge of the Juvenile and Domestic Relations District Court for the 23rd Judicial District of Virginia, which covers the Roanoke Valley. He has occupied that position for 29 years. He received his B.A. Degree from New York University and his Juris Doctor from the University of Richmond School of Law. He was admitted to the Virginia State Bar in May, 1977, and is a member of the Virginia Bar Association and the American Bar Association.

Judge Trompeter has served as president of the Mental Health Association of the Roanoke Valley and the Child Abuse Prevention Council, both United Way-member agencies. He serves on the Board of Directors of the Jefferson College of Health Sciences, and recently completed service on the Board of Directors of the Community Youth Program at St. John’s. He has served on the Board of Governors of the Family Law Section of the Virginia State Bar, and was chairman of the Substance Abuse Committee of the National Council of Juvenile and Family Court Judges. He chaired the Roanoke Valley Drug and Alcohol Abuse Council for 14 years.

Judge Trompeter served on the Gender Bias in Virginia’s Courts Task Force; the Interim Commissions for Judicial Performance Evaluation; and was on the faculty of the Virginia State Bar Professionalism Committee. He has served as an advisory member to Virginia’s Court-Improvement Project for Abused and Neglected Children in the Office of the Executive Secretary since its inception, and remains a member of the Committee on District Courts – all by appointment of the Chief Justice of Virginia. He was recently appointed to the Board of the Domestic Relations Section of Virginia Bar Association, and was appointed as a Mentor Judge for newly-appointed judges, also by the Chief Justice.

Judge Trompeter was the founder and co-facilitator of “Families in Touch”, a support group sponsored by the Mental Health Association for families of persons suffering from mental illness. Judge Trompeter Founded the Roanoke Valley CASA Program more than 25 years ago, which was the first such program in the Commonwealth. As an aside, I wish I had more time to go into detail about CASA, which stands for Court Appointed Special Advocate Association; if you ever had the desire to help a child, this is a wonderful and rewarding way to do so. He is past president of the Board of Directors of Beth Israel Synagogue. Judge Trompeter initiated Virginia’s first Domestic Violence Court
Program, addressing services to adult and child victims and perpetrators before the Court. He has chaired the Roanoke County/Salem Best Practices Team for Abused and Neglected Children since its establishment. Over the course of his career as  judge, he has served on the faculty of countless CLE Programs for the Virginia State Bar, the Virginia Bar Association, the National Council of Juvenile and Family Court Judges, and related legal organizations.

In recognition of his advocacy and education efforts on behalf of children and families, Judge Trompeter received the National Mental Health Association’s first Tipper Gore “Remembering The Children Award”, which was presented to him by Mrs. Gore in May of 1993. He is a recipient of the Brotherhood Award from the Roanoke Chapter of the National Conference of Christians and Jews. He received a 2004 Distinguished Service Award from the Mental Health Association of the Roanoke Valley for his work in establishing a local court-improvement project addressing the needs of neglected children before his court. He was presented a Proclamation of Appreciation from the Roanoke County School Board in December, 2006, for his efforts on behalf of children. More than a year ago, Judge Trompeter received a “Courage To Care” award from the Roanoke Valley Prevention Council for his advocacy in substance abuse prevention for youth. In the spring of this year, Judge Trompeter was presented the Golden Halo Award by The Children’s Trust of Roanoke Valley, a United Waymember agency, its highest honor given to a person in the community for service to children and families.

In September, 2013, the Chief Justice of Virginia presented Judge Trompeter with the 2012 Harry L. Carrico Career Service Award on behalf of the Judicial Council of Virginia, for demonstrating exceptional leadership in the administration of courts while exhibiting the traits of integrity, courtesy, impartiality, wisdom and humility. Judge Trompeter is the first and only district court judge in Virginia to have received this distinction.

In order to put this award into perspective for those who are not familiar with the internal intricacies of our Judicial system, this would be the equivalent of being named the MVP of the Judicial All Stars Team.

Of particular note, given this audience, he has been twice named as a Paul Harris Fellow for his service to others.

Judge Trompeter is a native of Roanoke, and he has been married to his wife, Sarina, for 36 years. They have grown children, and are very proud grandparents to Ella.

I also just learned that he is an accomplished concert pianist, as well as an avid gardener, and a certified Body Jam instructor. 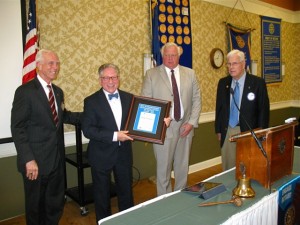 That outstanding list of accomplishments and awards alone is enough to warrant this honor, but that’s not the primary reason for it. That list is tangible evidence of a wonderful, involved, caring and compassionate person who is totally committed to improving the lives of individual children, families, and thus our community.

I have known Phil and worked in courtrooms over which he presided for over 30 years, and during that time, came to know a “good man”. He doesn’t just hear the evidence, make a decision, and move on to the next case, which is all he is required to do. He goes way beyond that to try and fashion a solution to “help” a troubled youth or family. His caring attitude inspires those who work with him to also do the very best job they can. I know that I have learned to be a better person because of my association with him.

In short, his good, caring and compassionate character manifested in his good deeds is what earned him this award. He truly epitomizes our motto of “Service Above Self” and Paul Harris’ directive “to do good in the world”.

It is my pleasure and honor to present our 2014 Out Standing Citizen, Philip Trompeter, who will speak to us now.

We commend Mark’s committee on making an excellent selection.