For many Club members today’s meeting is one of their favorites.  Annually, the presentation of the Jostens Trophy and meeting the winners, without fail, lifts the spirit and brightens one’s outlook for the future.  To hear from terrific young people and learn of their accomplishments is a pleasure. 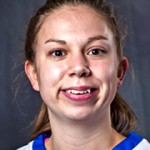 Fischer, a native of Reisterstown, Md., helped guide the Saints to a 17-11 overall record and a trip to the Capital Athletic Conference Tournament.  Fischer was recently named a First Team All-CAC member for the third straight year. For her career, Fischer set various the CAC and MU records.

Fischer’s accomplishments extend far beyond the court into the classroom and the community. In the classroom, Fischer sports a 3.97 grade point average as a Business major and has been a CAC All-Academic honoree the past three years.  She was named a First Team Capital One/CoSIDA Academic All-American for the second consecutive year in 2014.

In the community, Fischer has spearheaded several events such as MU’s annual “Sock it to Me” drive to make care packages for Arlington’s local homeless shelter.  She also helped raise over $7,000.00 for St. Jude Children’s Hospital through a walk-a-thon.  Fischer, who is Vice President for Marymount’s Student-Athlete Advisory Committee, also serves as a resident advisor and a peer tutor. 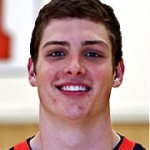 Bonney, a native of Norwich, N.Y., is the 2014 Liberty League Player of the Year and a two-time First Team All-Liberty League selection.  He helped lead the Statesmen to a 22-7 overall record and their second-straight Liberty League Tournament championship.  Hobart then defeated No. 21 University of Scranton in the first round of the NCAA Division III Men’s Basketball Tournament, 94-81, before falling to Morrisville State, 86-75, in the second round.

Bonney is just as impressive in the classroom and in the community. In the classroom, Bonney boasts a 3.88 grade point average as a philosophy and public policy studies major.  He is a two-time Capital One First Team Academic All-American and was voted the 2013-14 Capital One Academic All-America of the Year for Division III men’s basketball.  The three-time Liberty League All-Academic Team selection is a Druid and Chimera, Hobart’s senior class and junior class honor societies, respectively.

In the community, Bonney has served as a pre-orientation leader for groups of incoming first-years during each of the past two summers, volunteering at Habitat for Humanity build sites in Geneva. He has helped with team basketball clinics in a local elementary school as well as an annual on campus basketball clinic for Ontario ARC.

To each school of these fine student-athletes the Club awards the Wooldridge Scholarship.  The scholarship is named after Dan Wooldridge, a Salem Rotarian and retired commissioner of the Old Dominion Athletic Conference, as a way of honoring him for his life-long commitment to service and excellence.

The Jostens Trophy and Wooldridge Scholarship Fund seek to honor the true student-athletes of NCAA Division III who exemplifying excellence in the classroom, on the playing court and in the community.