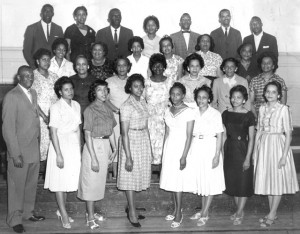 Due to events at the Salem Civic Center we met “off-campus” at the G.W. Carver Elementary School.  Diane Washenberger, Director of Instruction, for City of Salem Schools and past Principal at G.W. Carver along with Mike Stevens, Director of Communications, for the City of Salem hosted and presented our program.  The City of Salem is in the process of preserving the rich history of the Carver School.  This year marks the 75th anniversary of the opening of the school that served the African-American communities in Roanoke County from 1939-1966.  For much of its existence, Carver was both an elementary and high school all under one roof.  At one point, the school served 483 students with one principal, one assistant principal, 24 teachers, three custodians, two cafeteria employees and one secretary-bookkeeper.

These employees provided the students with a great learning environment, but Carver was about much more than just books and grades.  The school also served the recreational, cultural and social needs of black people who lived in Salem, Hollins, Vinton, Delaney Court, Pinkard Court, Starkey, Dixie caverns, Big Hill and Boones Mill.  Today we learned of the school’s historical role in the City of Salem’s school integration.  Mike Stevens and Carver alum Marylen Harmon, a member of the Carver Class of 1966, have worked with the Carver Reunion Association to preserve the history of the school.

To that end, Mr. Stevens has conducted many interviews of students and teachers, who made Carver such a special place for so many, to create a full length documentary by Black History Month in 2016.  To give a peak into the school’s rich history and proud legacy we viewed a video of a teacher at G.W. Carver from 1954-1966, Lucy Harmon.  Mrs. Harmon was Mr. Steven’s first interview.  She was actually taught by G.W. Carver as a child and happened to marry the Principal of school at the time, C.D. Harmon.  Given the quality of the Lucy Harmon interview we all look forward to see the completed documentary. 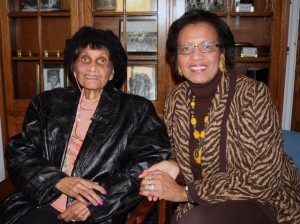 Below is an excerpt from the Salem Museum website to provide additional background on the G.W. Carver school’s history…

School Integration Had Its Trade-Offs

“The peaceful integration of Salem schools was an exceptional feat, but as always achievement had its trade-offs. For the Water Street Community, the biggest one was the closing of Carver School. Since there was no longer a need for a segregated high school, the building was converted into the integrated Salem Intermediate. The students and teachers were divided and reassigned to other schools. Principal Harmon, for the second time in his career, found himself removed from a position through no fault of his own. He finished his career in the administrative position of “visiting teacher,” a change he accepted with customary grace. He retired in 1978 and died in 1993, regarded by all as one of the elder statesmen of Salem’s African American Community.

For all the advantages of integration, the loss of Carver was a blow to the Water Street Community. Carver had long been an anchor to the blacks of Salem, a symbol of opportunity, achievement and community in the face of segregation. Its closing meant a diminishing of the community’s identity, something which many resented.

Carver teacher Georgia Reeves later told School Superintendent Wayne Tripp that Salem’s blacks “lost more than they got.” According to Reeves, in the segregated Carver, black students “received attention and values that they did not get in the integrated schools. The exceptional students benefited from academic scholarships and athletic opportunities that opened as a result of integration, but the average student suffered because their new schools were ‘not like family.”

The reassignment of teachers also engendered a few hard feelings. Still, this nostalgia for the old days should not be taken as a desire to turn back the clock. Few looked on integration as a mistake to be rectified, and no fair observer could miss the many obvious advantages & emdash; better facilities, wider opportunities, and a new dawn in race relations.

But it is no surprise that a later drive would be undertaken to commemorate the role the school had played for nearly three decades by returning to the venerable name George Washington Carver. In 1977, with the building of the new Salem High School, Andrew Lewis became the local junior high, and the path was cleared for Salem Intermediate to once again bear the name Carver, now as an elementary school.” 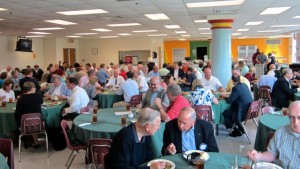 The documentary planned for Black History Month in 2016 will be
an inspiring, positive, uplifting story and of interest not just
to the Roanoke Valley, but also beyond our ridge line.