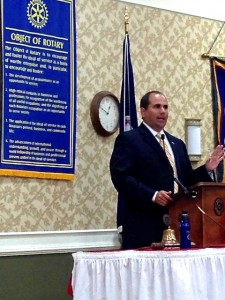 Delegate Greg Habeeb’s opening remarks recognized the previous holders of his seat in the State Legislature, Judge Agee and Morgan Griffith.  He stated it was his honor to now be recognized as the “Gentleman from Salem”.  Delegate Habeeb represents the cities of Salem & Christiansburg and the counties of Craig, Montgomery and Roanoke.   He lives in Salem with his wife and three children.  His brother has followed in the footsteps of John Hall as principal of Salem High School.

Delegate Habeeb reviewed what was accomplished in Richmond and the plan for the coming months.  Here are some of the topics and issues he reviewed.

One of most important accomplishment was SOL reform.  The current SOL tests were not fulfilling the purpose for which they were intended 20 years ago.  Habeeb has worked closely with Dr. Alan Seibert, Superintendent of Salem Schools, in Seibert’s role as Chair of the state-wide Superintendents Association to bring about initial changes to the program.  First step was to reduce the number of test.  Dr. Seibert has been appointed as member of a committee tasked with revamping the methodology behind the tests.

Concerns over the Commonwealth’s mental heath practices led to reforms to improve procedures system wide.  Current efforts are just the start.  No quick fix is possible for a complicated issue involving societal, healthcare, educational, and law enforcement components.  Prior to this session there was not a legislative committee responsible to study and oversee mental health issues.

Recent ethic issues led to a bi-partisan bill which starts to address the problems.

Transportation issues have little media converge of late.  State transportation money has not been spent efficiently by local governments.  As a result, Richmond will increase oversight as to how transportation funds are spent.

Medicaid and budget issues occupied a good deal of the legislators time and attention.  At the crux of the issue was Medicaid expansion and its impact on the state budget.   This became a more difficult issue when Medicaid expansion was tied to passing a new state budget.  In the end, the two were decoupled with a budget being passed and Medicaid being set aside for further debate.  Since the passing of the budget, weak tax revenues have furthered impacted budgets for education, public safety, transportation, and local governments.

Medicaid has grown from 6% to 22-23% of our state budget.  70 cents of every  dollar of new spending currently goes to Medicaid before any further expansion of the program is factored into its cost.  Legislators are committed to providing access to healthcare with good outcomes at affordable prices.  Delegates are returning to Richmond in September to try and find solutions.  Citizens, particularly those in healthcare and insurance industries, are invited to contact Delegate Habeeb with any suggestions.

For more details on the past legislative session and issue positions visit Greg Habeeb’s website.