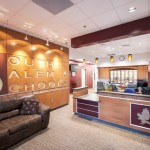 The Salem Fair nudged our regular Club and Board of Director’s meetings from the Salem Civic Center to the South Salem Elementary School.  Club member Dr. Alan Seibert, Superintendent of the City of Salem Schools, was good enough to make arrangements to host the Club and provide our program.  Dr. Seibert told us the history of the school, which he attended as a child.  He told us his insights into the decision making process that led to the successful renovation of the school.

South Salem Elementary on Carolyn Ave. opened in 1964 and at the time was considered one of the most innovative schools in the state.  Not only was it the first air conditioned school in the county system, but the circular design was considered the cutting edge of educational architecture. 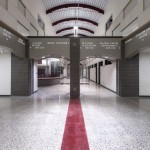 The new $17-million South Salem Elementary school was dedicated in December of 2013.  It was the first built since the Salem school system became independent over 30 years ago.  One can sense as they approach and enter the building that it exemplifies the Salem Way of doing things.  A full appreciation of the project’s success became clear as Dr. Seibert spoke from the decisions made by city leaders to proceed with building during hard economic times to the school administrators’ goals to make it a model for 21st century school buildings.

As a result of good planning and its implementation, the renovation of the South Salem Elementary School met its goals and came in under budget.  This created a surplus of funds to be available that later went to help build a better learning environment for students and teachers at East Salem Elementary School.

For many of the other details Dr. Seibert shared please click this link to the Fall 2013 Salem Magazine article Building Blocks in the Our Schools section of the magazine.  At the end of the program guided tours of the facility were provided. 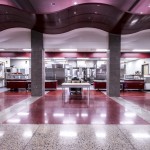 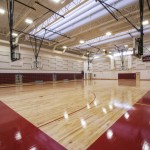 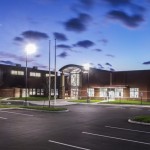