Opera Roanoke, led by its General and Artistic Director, Scott Williamson, presented a program of holiday music for the December 19 meeting.  The program featured several of the bright talents of Opera Roanoke’s Apprentice Artist Program.  In introducing selections from Handel’s Holiday favorite, Messiah, Williamson observed that “Messiah would not have been written if opera had not been so popular in 18th century Europe.”  Since opera was banned during Lent, Handel turned to writing sacred works.

The program concluded with several popular carols, with Williamson joining a trio of young artists, accompanied by pianist Judy Clark.

Click here to enjoy a brief video of a favorite holiday carol. 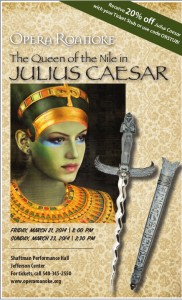