“Leading Men of Character in Afghanistan” 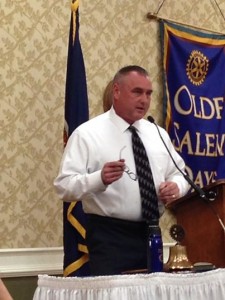 Today we were privileged to hear a man speak publicly for the first time about his experience and memories of the men with whom he served in combat.   Eric Horne would much rather talk with you about The Window Man, the business he started in Salem years ago.  He, as well, is a Patrol Sergeant in the Roanoke City Police Department.  We appreciate his finding the time to be with us today.

Mr. Horne served two tours in the U.S. Army during the first Iraqi War and came home an infantry Captain.  After 911 he reenlisted at the rank of Sergeant to serve in Afghanistan.  This act alone cannot better validate Mr. Horne’s understanding of the term character.  Mr. Horne was honest and direct in his comments.  At times it was evident that the memories were personal and difficult to share.   In the audience of appreciative Rotarians there were fellow comrades-in-arms from the military and police department to offer moral support.

Mr. Horne was not without a sense of humor.  Quoting Mark Twain… “Adversity introduces a man to himself (anonymous)…  I have met that man and he’s a miserable SOB”   There is no greater adversity than war.  And in adversity men fighting together form bonds that cannot be easily characterized.  Bonds which create true heroes.  Men “who died for each other.”  In the totality of the experience “war does distort you.”

Mr. Horne spoke of having the luxury of support from family, friends, and his faith.  Many veterans do not have the safety net needed to overcome the affects of the hardships experienced while in the service of their country.  Mr. Horne stated, “the finest we have are 11,000 miles away.”  Upon their return home one would hope and expect them to be treated in a manner commensurate to their sacrifice.

Regardless of the war or the side, to a soldier it is very much the same.  Mr. Horne quoted the following inscription from a war memorial, which he felt expressed some thoughts he wished to share.  The inscription is from a South Carolina Confederate Monument erected in 1879 by the Women of South Carolina and written by S.C. diplomat and historian, William Henry Trescot.

This monument
perpetuates the memory ,
of those who
true to the instincts of their birth,
faithful to the teachings of their fathers,
constant in their love for the State,
died in the performance of their duty:
Who
have glorified a fallen cause
by the simple manhood of their lives,
the patient endurance of suffering,
and the heroism of death,
and who,
in the dark house of imprisonment,
in the hopelessness of the hospital,
in the short, sharp agony of the field
found support and consolation
in the belief
that at home they would not be forgotten.