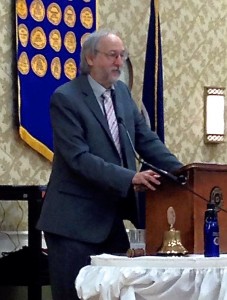 Dwayne Yancey, Editorial Page Editor, Roanoke Times is a veteran journalist at The Roanoke Times for more than 30 years.  In addition, Mr. Yancey is the author of “When Hell Froze Over” a book on the campaign and election of former Virginia Gov. Doug Wilder, and is an accomplished playwright.

Club member Steve Agee introduced our speaker as not reflecting the stereotype many might expect.  Since becoming editor of the editorial page in July of last year, Mr. Yancey has brought an independent thought and fresh perspectives to the Roanoke Times editorial page.

Mr. Yancey shared observations on how the business of journalism has changed over the last three decades and some personal views on how he approaches his profession.

The impact of digital technology on the newspaper business and journalism in general has been game changing in many respects.  Just to touch on a few mentioned.

In mid 1980’s Roanoke Times had 600+ employees, now 200+.  Circulation was well over 110,000+, now 60,000+. The only publishing medium was a print edition produced twice daily.  PC’s (or data terminals to mainframe or mini computer) were few in number and shared by several reporters.  Advertising revenues were a straight forward calculation.

In the 90’s discussions were on if or how a transition from print to online publishing was coming.  Was online content going to be free or fee based in order to read content?  Into the 00’s questions on what the best methods to monetize online advertising came to the fore which today are still evolving.

Over the years surprisingly (to this writer anyway) Mr. Yancey did not cite the personal computer or the Internet as the most disruptive technology.  PC’s and the Net were the foundation of a paradigm shift in the business model.  Today the full repercussions of online social  networking and smartphones have yet to be fully understood much less determined.  Social media and mobile technology have not only shortened the “news cycle” to a “now” 24/7 ubiquitous demand for news but also to challenge what the definition of journalism is in to day’s world.

Mr. Yancey comments on the 2013 acquisition of the Roanoke Times by BH Media Group Holdings, Inc. helps provide a framework for understanding how smaller market newspapers can survive.  In a shrinking world where online global and national news is only a “click” away and available when away from home and office, being a good reliable source for local news is a viable niche to establish.  An independent mind set, relying on presenting facts and being hesitance on “taking positions” to influence readers opinions sounds like a good plan to overcome the challenges facing regional newspapers.  The Roanoke Times would appear to have made a good start by selecting Mr. Yancey as Editor of its editorial page.