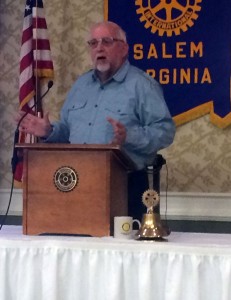 Alan Hoal, Storyteller from the Sounds of the Mountains Festival

This meeting featured the power of telling a good story. Everyone loves a good story and Alan Hoal certainly didn’t disappoint as he entertained the Salem Rotarians with a bit of wit and wisdom as he utilized the form and format of storytelling. Harry Norris introduced Alan as he took the podium and introduced himself as a member of the Optimist Club, storyteller and retired lawyer. Alan proceeded to instruct that we are all storytellers, from teachers to salespeople. Alan also informed the club about the event, “Sounds of the Mountains” which was held April the 15th at Camp Bethel in the Blue Ridge.  http://www.soundsofthemountains.org.
Alan proceeded to tell a couple of stories, much to the delight of the Rotary Club and guests alike.
One of his stories was about a traveling preacher, a mud puddle and his false teeth that fell into the puddle.
This story wove many images as a result of his vivid account of the creative way the preacher recruited someone to retrieve his teeth from the puddle.
Alan wrapped up with one more story about a million dollar race horse and a bargain priced blanket to cover the horse. In addition, Alan brought handouts to the club, one with multiple quotes. One quote stated, “ Great stories happen to those who can tell them.” — Ira Glass.
President Tommy thanked Alan and adjourned the meeting with the 4 way test.