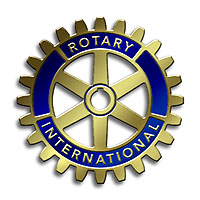 The Rotary Club of Salem Service Above Self Award was presented today.  This award is given in recognition of service offered by a non-Rotarian in a non-management position which the committee considered to be exceptional and which also reflected the core values of Rotary.

The 2015 award winner is Mr. Wayne Sowers, the Recreational Site Supervisor for the City of Salem Parks and Recreation Department.  Mr. Sowers was joined by family and friends.  John Shaner spoke of Wayne’s character and humor as just some of the many attributes he possess that contribute to the ongoing success of the Parks & Recreation Department and to the morale of its personnel.

Over his 20 years of service, he’s greatly impacted the success of Parks and Recreation sporting events, major community events, and greatly improved the image of Salem.  He is a key component of a host of Salem community events, including the Blue Ridge Music Fest, Salem High School football games, Olde Salem Days and many more.  Wayne’s friendly and helpful personality, voice of comfort and understanding, and sense of mission accomplishment is outstanding and infectious.

Recent Service Above Self Award winners (some of whom were in attendance today).