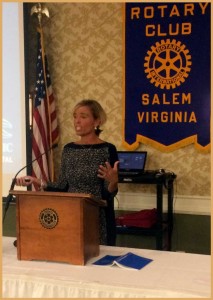 Brooks Michael shared her expertise with the Rotary Club of Salem discussing youth risk behavior with an array of data to illustrate where we have been in the past and where we are today with particular high-risk behaviors specifically targeted at teenage students. Mrs. Michael presented her surveys on attitudes and behaviors, local and national issues ranging from teen alcohol, tobacco, drugs, sexual activity, violence, to depression. Brooks added that Virginia Tech assists in analyzing the data and employs different techniques to insure the data is valid. Local data was given by Brooks as she compared that with national metrics to give a baseline comparison.
Trends were also presented by Mrs. Michael addressing youth issues such as the ease of the acquisition of tobacco and alcohol by high school and middle school students and where they can acquire it, which were supplied predominantly by friends and family. Also data provided showed that it is a bit more difficult for students to get alcohol today than 5 years ago. Brooks gave context to teen’s behavior as she shared that the human brain doesn’t fully finish developing until the age of 25 specifically the frontal lobe that controls judgement and consequences. The aforementioned translates that youth can be less concerned about their actions and resulting consequences as their decision making abilities are not fully developed. Also, brain activity for the heavy drinker is much less than the brain with little or no alcohol.
Marijuana use was also discussed as roughly 1 in 3 high school students were found to have used marijuana as the national trends reflected around 40% range. Students were polled that a larger majority (86%) of middle school students felt the effects of marijuana are dangerous or harmful versus around 46% of high school students. 70% of Salem High School students stated that they could acquire marijuana contrasting 10% of middle school students.
In addition, use of marijuana locally for high schools students were reported as trending downward. Data also revealed that clear rules communicated to students, from their families, were helpful and revealed that it does influence their decision making. Surveys on cocaine, heroin and ecstasy use were in the single digits for high school students locally.
Brooks moved onto the subject of sexual activity of local youth as 8th graders were surveyed that 7.6% were sexually active versus 40.9% for high school age students as the number is 46% nationally. The good news is that pregnancy rate among teens locally are trending downward. Also, the realities of parenting teens were discussed and how difficult it is for parents to talk about these subjects with their children. Brooks stated that parents need to remember that teens are still developing and emotions rule their decision rather than logic. She urged parents to not be afraid to discuss with teens about high risk subjects and also to listen to their teens. Mrs. Michael summed up her talk with one last tip which is that cars are a great place to talk to teens as they are a captive audience.
Order Retin-A