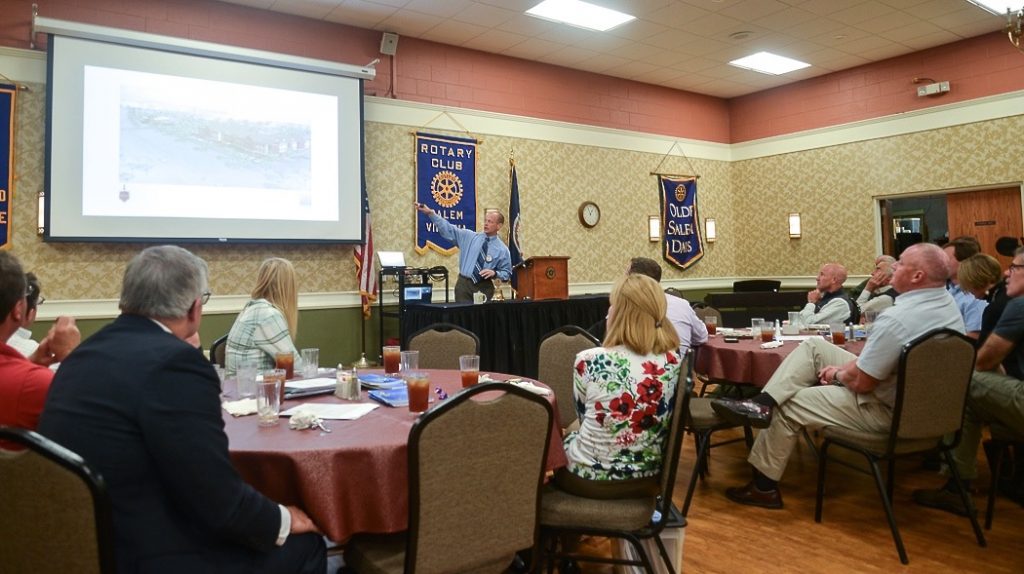 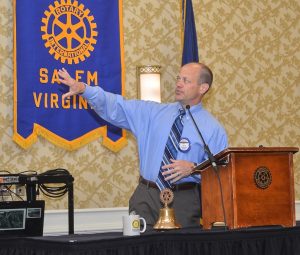 Our program today was the second in a series of presentations by local government administrators.  Club member Kevin S. Boggess is the Salem City Manager.  Kevin is the longest servicing local government manager in our region.  In his opening remarks he corroborated the comments made last week by Mr. Gates regarding the positive relationships among local governments.  Kevin stated he… “never [had] seen better relationships”, which in his mind helped to explain the economic development successes we have experienced in the Roanoke Valley.

Kevin focused primarily on the following activities and projects related to the City of Salem.

The Thompson Memorial Plan:  The Thompson Memorial corridor is the primary entrance way from US 81 to downtown Salem.  It is the first impression many visitors have of our city.  City planners will be working over the next year on a development plan to preserve the aesthetics of the tree lined boulevard while optimizing its potential to expand our tax base.  Click on link above to learn more.

The Downtown Plan:  Kevin touched on the initial work being done as part of first phase of implementing this major city project.  The details of the revamping of downtown were not knew to many members due to general awareness and a recent club program on this topic given by City Planner Ben Tripp.  We are all excited to see the vision start to take shape.

The search for good ideas new approaches to city planning and development are ongoing.  Kevin gave a recent example of how City Department Heads and staff along with City Council members traveled to Greenville South Carolina to learn more about its successful urban development projects.  The consensus among the participants was positive regarding what they had discovered and enthusiastic as to how they might adapt findings to the Salem Way.

Part of efforts to invigorate downtown include expanding the venues used for activities as well as adding new events to foster more traffic to Main Street.  The “Parkway Downtown” event on the lawn of the Salem Public Library is a great example.

On the same theme, but on a larger scale the inaugural LewisGale Salem Half Marathon to be held Saturday October 15th was created as a complement to our being known as “Virginia’s Championship City”. The initial response based on registrations is promising and likely will become another annual Salem event of note to draw people into Salem.  Post race reports…

Many praised the race’s organization.

“What a great first event,” said Harrington, a 46-year-old from Lynchburg who is a regular at half marathons in the Star City. “I always like to do first-year races and they did a great job.

“If you don’t do well your first year, it can be tough to recover.”

Event officials have already announced that race will return next fall on Oct. 14.

Kevin also spoke about regional partnerships projects such as the Western Virginia Regional Industrial Facility Authority we learned of at last week’s meeting and the Broadband Authority.

The next “big” project for the city will be the future City of Salem High School.

All in all, Kevin gave us much to feel good about.  On reflection, Kevin’s comments brought to mind that many Rotary Club of Salem members have over the years held and currently hold civic positions.   Past members and these current members are due a well deserved thanks…

Thank you, all, for collectively making where we live a good decision! 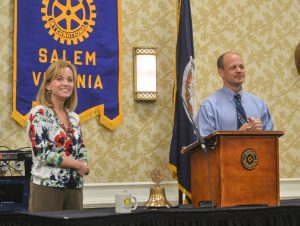