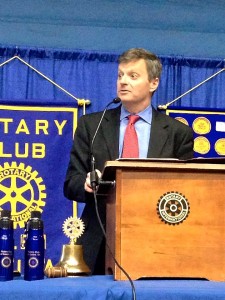 The Mountain Valley Pipelinem (MVP) is a partnership between affiliates of EQT Corp. and NextEra Energy to build a 300-mile pipeline in response to growing demand for natural gas.   Recently Washington Gas & Light became a new minority partner.  The MVP will start in Mobley West Virginia and terminate near Chatham at an interconnecting station with existing pipelines feeding to the North, South and East.  If the current schedule for the project MVP will be fulfilling supply contracts by end of 2018. 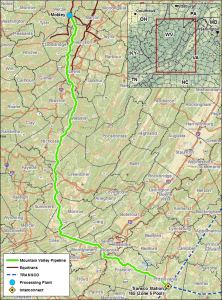 Mr. Dawley reviewed the many steps in the project from gaining access to survey possible routes, to acquiring rights to build on landowners property, to meeting the regulations from various federal, state and local governments.  The basic engineering and design of the pipeline were also explained and presented to reaffirm that the safety of people and quality of the environment were the highest priority.

Mr. Dawley characterized the pipeline as an open access pipe. Local gas distributors can be fed at points built not only during the construction phase of the project but also using “hot taps” enabling cost effective access after the construction is finished. The economic impact during construction and projected tax revenues to local counties were also outlined.

For all the details visit the Mountain Valley Pipeline website

For a recap of the first program on Jan. 29, 2015 of those opposed to the project with links to more information click here.