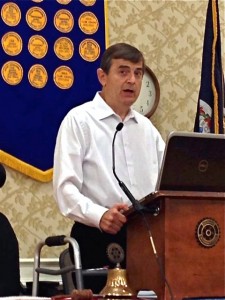 At this meeting each year the Club President passes the baton to the incoming Club President.  Today 2014-15 Club President Bertram Spetzler, MD stood from his wheelchair to deliver his address to the Club as a sign of respect to his new office.  President Bert let the membership learn a little more about himself and of his approach in guiding our Club for the coming year.  By the end of his speech President Bert reaffirmed his unique sense of humor and affirmed his belief in Rotary and in those who comprise its ranks.

Below are just a few quotes from President Bert’s address to the Club.  Our apologies for being unable to replicate the delivery and timing of those comments that brought us a smile.

… “Ask not what your country can do for you, ask what you can do for your country”… “the phrase from Pres. Kennedy’s inaugural address rings as true today as it did back in 1960.  Although it may seem that we as a country are going in the wrong direction from that theme, I believe that that is not true for the individuals, the Rotarians, in this room.

Yes, we encourage… and Paul Harris initially founded Rotary so that business leaders could get to know each other, form relationships and work together and support each other.  We need to encourage young members to continue to come to us for exactly that purpose, follow the Four Way Test and grow with us.

But Rotary has become much more… we have as our motto Service Above Self.  A motto that I have on my license plate, something I take to heart and try to remember in my everyday dealings.”

… “So when I look back on my life, my country, my community and support system it has given me a tremendous ability to develop whatever talents and ability I have.  So when I was asked to join Rotary 32 years ago, I was eager for the opportunity to give back.  Being a Rotarian has been an honor and has given me the pathway to do that.

So what are my grandiose plans for this coming year? Number one through five are quite simple:…… Don’t screw up what works well.”

… “ There is only one project that I am willing to support for extra funds from our club. That is the campaign to eradicate polio. It is said that polio and its treatment was the father of orthopedics. I was not involved with the multiple reconstructive procedures that were done but my partner that many of you know Dr. Fisher was. I treated elderly patients who had polio while they were younger and survived with the residual handicaps. I could tell you stories about them, but time will not allow…

… and if I as an individual can have a very small part and we as a Club a part and Rotary a big part, both in having started this project [Polio Eradication] and seeing it to completion. We will collectively as Rotarians have left this world a better place. It is a goal worth fighting for!”

…“For this last thing that I will share with you, I need to your participation, this advice given to me by one of my professors as I was finishing my orthopedic residency. He reminded me that when I left the confines of the University I would be on my own. People would be second guessing me, there would be long hours, sometimes endless paperwork, I would sometimes get frustrated:”

Remember to CYA  (President Bert explained CYA was not what many assumed but an acronym for Choose Your Attitude.  It suggests we be aware of others circumstances, to not be overwhelmed by tasks confronting us, and to maintain a positive attitude in the face of adversity.)

“Now this is where you need to help me… stand up if you are still awake, you all know how to do YMCA [song]… my professor once taught me this, CYA, let’s do it so you can remember CYA……”

Under President Bert it seems we shall “Light Up Rotary” under a new CYA paradigm.