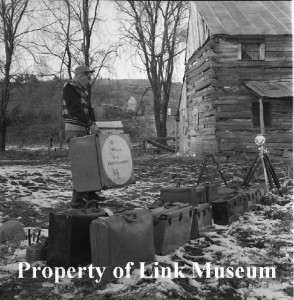 Arnold explained that Link’s formal education was that of a civil engineer, but upon graduation in 1937 jobs were few and far between.  It was those circumstances that led link to become a self-taught photographer.  His civil engineering degree proved invaluable in the planning and staging of his dramatic black & white photographs.  Mr. Arnold told of Link’s preference to photograph at night because he could then control the lighting much more effectively.  It is amazing that Link had such success mastering the night just with the use of flash bulbs.  Link designed the lighting equipment used to control the lighting for his photographs. 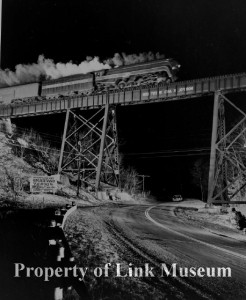 Link’s desire “to capture life along the railway” is evident in the 250 photographs exhibited at the museum.  Arnold stated that Link would try to get a person in most of this scenes.  Link’s photographic history of the Norfolk & Western Railway took him throughout the mountains of Virginia, West Virginia, Maryland, and North Carolina.  The museum exhibits of black & white photographs are often shown with partnering color photos of the same scene.  All in all, they present the rich history of the regions railway system between 1955 and 1960.  Mr. Arnold did a wonderful job of bring that era back to life through Mr. Links photographic gifts.