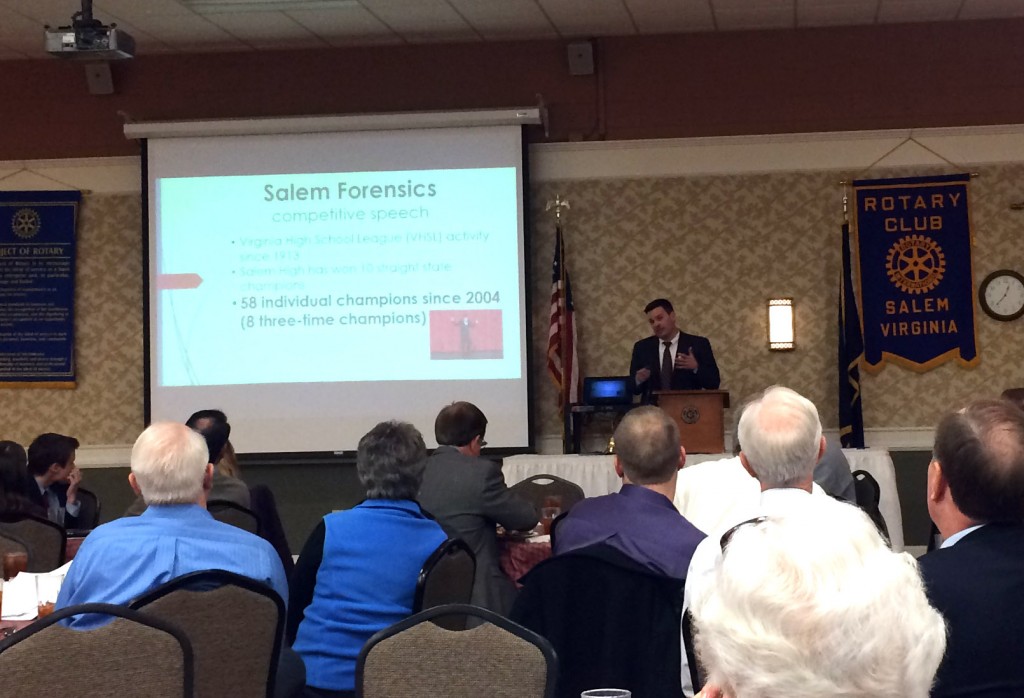 This club meeting was entertaining and informative as Mark Ingerson, a Teacher and Forensics coach at Salem High School, presented and brought along 3 students who were part of this year’s Virginia High School League’s State Forensics Champions. Mark outlined his presentation with a history of this program stating that it has been a Virginia High School League activity since 1913. He also proudly presented that Salem High School has won 10 straight Forensics State Championships. Also, Mark had stated that Salem has had 58 individual champions since 2004 with 8 three-time champions.

Also, Mark made a compelling case for the Forensics program and the importance of public speaking with a study from the National Association of Colleges and Employers that listed the top 10 skills employers are looking for which are the ability to work in a team structure, ability to make decisions and solve problems, ability to communicate verbally with people inside and outside an organization, to name a few. The Salem High Forensic program prepares students to meet those challenges and with these skills, assisted students who participated in the program to be able to gain admittance into the top colleges and universities.

Mark brought 3 of his students with one, who was given the charge of impromptu speaking, and the other 2 students who put on a presentation designed to invoke a thoughtful performance designed to invoke an emotion from the audience. The first presentation had 3 topics which could be quotations, proverbs, people, objects or events. A total of 7 minutes were given for the speaker to write and give a speech of one of the 3 topics that were given in the moment. In the spirit of Rotary, 3 quotes were given from famous Rotarians which started with Winston Churchill “Success consists of going from failure to failure without loss of enthusiasm.” Sam Walton was quoted “High expectations are the key to everything.” And the third quote from Thomas Edison “I never did a day’s work in my life. It was all fun.” The student chose Thomas Edison’s quote and exhibited a compelling presentation that showed why Salem High School was this year’s State Forensics Champions. After both presentations were complete, the meeting adjourned after the recitation of the Four Way Test.