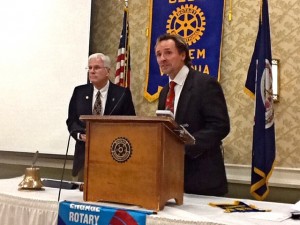 Dr. Olsen completed his 20th season at Lynchburg College in 2013.  Coach Olsen has built a perennial conference and regional powerhouse and a consistent NCAA postseason tournament participant.   Interview on You Tube

“It starts with a ball”

Dr./Coach Olsen told us about how he established a relationship as a volunteer Community Public Health Epidemiologist with the Sports Outreach Institute.  And of his multiple trips to Africa in this role utilizing his unique background as soccer coach and epidemiologist.  Blending health tutoring and soccer Olsen has helped develop and implement community health workshops and programs on community public health issues (such a potable water) in Nairobi, Kenya and Gulu, Uganda.  His efforts have helped serve some of the world’s poorest people.  “Public Health 101 Gulu Style”

Dr. Olsen shared the incredibly inspiring story of Phiona Mutesi who he learned of through Robert Katende a Sports Outreach coach in Katwe Uganda.

In 2012, Olsen was inducted into the Capital One CoSIDA Academic All-America Hall of Fame, which honors his philanthropic and coaching achievements.