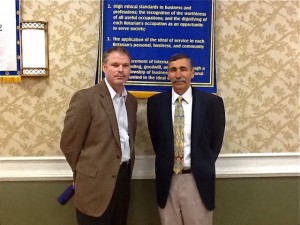 Concussions: More Than Getting Your “Bell Rung” – Jim Buriak Director of Athletic Training at Roanoke College and Dr. John Creasy Associate Professor of Health and Human Performance  spoke to us to day on a topic that has merited greater attention at all levels of sports.  From youth athletics to professional sports the diagnosis and treatment of concussions has become a topic of concern and increased study.

The 4th International Conference on Concussion in Sport Held in Zurich, November 2012 determined a concussion is a subset of a mild traumatic brain injury (mTBI).  Concussion is the historic term representing low-velocity injuries that cause brain “shaking” resulting in clinical symptoms and that are not related to pathological injury. The definition of concussion was defined as follows:

Current research and treatments as conducted and implemented by our speakers give comfort to parents of young athletes and mature athletes that their love of sports will not result in long term negative side effects.