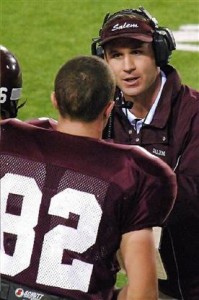 “Are You Ready For Some Football?”  Today we had the pleasure of Club member Dan Wooldridge’s annual update on changes to NCAA college football rules and a presentation by the Head Coach of the Salem Spartan Stephen Magenbauer.

First off the bench was Coach Magenbauer.  In his eleven years as head coach of the Salem Spartans the team has won back-to-back state championships in 2005 and 2005 and compiled a 108-19 record.  Coach Magenbauer also teaches in the Business Department of Salem H.S.  In 1989 Coach Magenbauer was the Spartan’s quarterback… WDBJ Friday Football Extra Flashback to 1989 and a story about overcoming adversity… 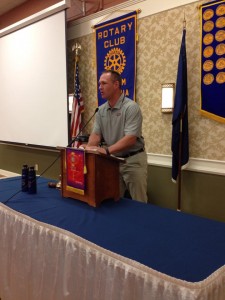 The coach spoke of his love of the game.  Part of which comes from his fascination with the diversity of people that make up a team.   Each year teenage boys of different sizes, varying interests and personalities, ethnic and economic backgrounds embrace a challenge, to share a common goal… to win.  The team is tested by the coaching staff to enhance leadership traits by developing mental and physical toughness.  The hallmarks of the Spartans championship program

The Salem Spartan winning tradition is also a story of consistency.   It starts with the hiring of each coach.  Leadership traits are valued as high as football IQ in all levels of the program.  The head coach can then allow the coaching staff to focus on their respective areas and Magenbauer to perceive the bigger picture.   This for Magenbauer can include from listening to constructive criticism from fans, to taking time to recognizes all the students in the school systems football programs down to the middle school level, and to “walk the lap” by touching base with his players before every practice.

Coach Magenbauer closed by commenting on how much our community cares about sports.  How this makes a big difference, contributes to the teams success and brings the community together.

This year the team has over 20 seniors and the skill players returning after making it to the state semi-final game last year.   WDBJ video Salem Spartans enter 2014 season with high expectations. Last words of segment… “been pretty impressive what he’s done over there”... 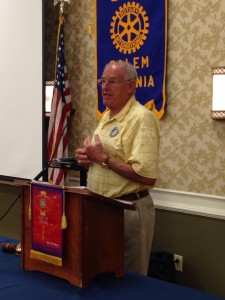 After an inside look into what makes the Salem Spartan’s a winning program, Dan Wooldrige shared his knowledge to help us better understand what’s going on the field from an officials point of view.   This year Dan said there weren’t many changes to NCAA rules.  The two primary points of emphasis remained on player safety and keeping a balance between the offensive and defensive sides of the game.  Dan reviewed two rule changes of note both related to player safety.  One dealt with “targeting” (when a defensive player tackles leading with the top of his helmet) and the other dealing with defensive players hitting the quarterback while he is in the pocket.

What is new and different is the ACC football conference games changing from 7 to 8 member officiating crews this year.  This is a growing trend in the major conferences with the idea being the more stripes on the field the less likely players feel they can get away with infractions.  Nonetheless, Dan believes an officials best deterrent and means to control the game is how they present and position themselves to make the calls.  Being in the right position and conducting themselves professionally goes a long way to have coaches accept their management of the game.  Dan helped us better understand by reviewing the role of each official and where they are positioned on the field.  Here as some of the basics. 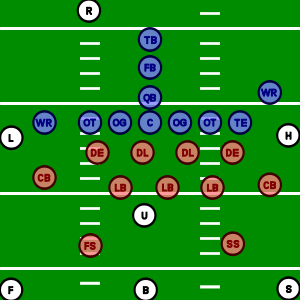 The Referee (Crew Chief) is positioned on the throwing arm side of the quarterback.  The new 8th official the Center Judge (not in diagram) will be opposite the Referee on the offensive side of the field.

The Head Linesman runs the chains and Line Judge are at opposite ends on the line of scrimmage and key on the tackles.  The H will run chains on alternate sides of fields.

The Umpire, considered the most dangerous to officials, midfield a few yards behind the line of scrimmage on the defensive side of the field.  He’s got all the action coming at him and keys on the center and guards.

The Field Judge and Side Judge key first on the widest receiver on their respective sides of the field.

The Back Judge positioned behind the deepest defensive back on the widest reciever side of eh field .

Once the play starts initial assignments can shift for some officials.  To learn more details you can start your research by clicking here.   Or sit with Dan for lunch one day.