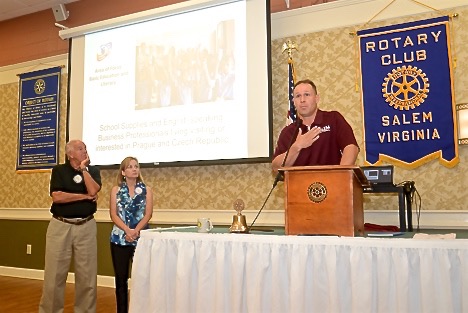 “Are You Ready for Some Football?” presented by Dan Wooldridge and Coach Stephen Magenbauer.  Today we received our annual update on NCAA/ACC college football rule changes and the preseason report on Salem High School Spartan football.

Dan Wooldridge reported there were very few changes in college football rules this year.  Most of the changes are about player safety and protection.  The definition and awareness of “targeting” players during play is being emphasized.  NCAA will have a central video review facility that can contact individual games to alert them of potential targeting plays or egregious errors.  An 8th official has been added to college games.  Also the replay crew will travel with the field officials.

At the high school level Salem High School Spartan’s football coach Stephen Magenbauer talked about the coming season.  The coach shared that though it had been a year since the loss of Adam Ward the team would continue to recognize him in the program.  Coach Magenbauer has a 154-41 career record, including a 136-20 mark in 12 years with the Spartans.  Salem won the state championship in 2015 for its third title under Coach Magenbauer and its seventh overall with a 17-14 double-overtime win over Lake Taylor in the Group 4A final. 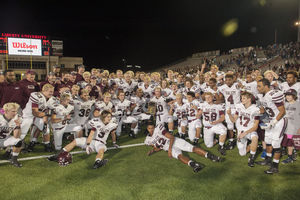 Each season is always a new situation.  Players that never played the prior season have worked hard and are now starters.  It will be the same this year. 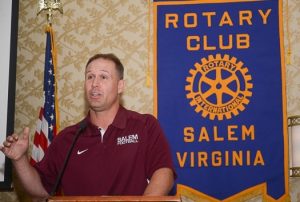 The Salem community really showed support for last years championship team. That is the past and this years team has been putting in the work and preparation for this season.  The interdependence of a football team is critical.  One player can have a significant impact.  The ripple effect is huge.

Many teams are going to run a spread offense throwing the ball for big plays.  Salem will still line up and come right at the other teams.  The run game will be established.  The top teams in the past have used this power run system to make deep playoff runs.  So do not expect to see Salem go to a wide open offense.  Defense will be work in progress.  Salem toughness always get the job done on defensive side.

Magenbauer finds it amusing that sports writers can rank teams in preseason without attending a single practice or any interaction with the team.  A prescient statement by the coach given the following day the Roanoke paper listed Salem #1 in the Timesland.   Perhaps the coach wanted to ease the pressure on his very successful program!

Our thanks to Joe Foley and Robert Dementi who provided content for this Rotary Recap!