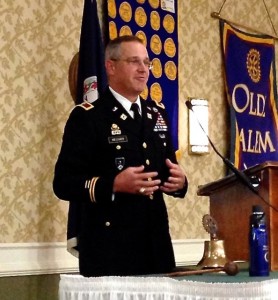 An Overview of the Virginia National Guard

Today Reid Garst introduced our speaker Col. Douglas Messner.  Reid and Col. Messner were roommates at VMI.  Good friends ever since, who even introduced to each other their prospective wives.  Col. Messner graduated from the Virginia Military Institute in 1987 and has spent almost all of his career in the Virginia National Guard.   He deployed to Afghanistan in 2004 as a member of the combined joint staff.  He commanded the Gate City-based 1030th Transportation Battalion, 329th Regional Support Group, and the battalion was recognized as the most ready battalion in the National Guard with the Reckord Trophy and Kerwin Award during his time in command.  In August  of this year Col. Messner relinquished command of the 183rd Regiment, Regional Training Institute to move on to the Virginia National Guard joint staff with responsibility for Joint Force Development

Col. Messner gave an informative overview of the Virginia National Guard.  He was very personable in his presentation of the structure and mission of our Commonwealth’s militia.  His comments and service were very much appreciated by all in attendance.

The Army is the largest component of the Department of Defense.  48% of which is the reserves and national guard.  54% of the reserve force is the national guard.   Each sate and territory has their own militia force.  The length of deployments vary with the Air Guard lasting 3-4 months and the Army lasting a year.  Training for National Guard soldiers and officers are the same as regular active duty personnel.  Over the years, even prior to 911, the National Guard has evolved as an active component of our country’s combat force.

Click here for an organizational chart of the Virginia National Guard. 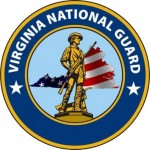 Virginia National Guard Mission
The Virginia National Guard provides the premier ready, relevant, resilient and responsive Army and Air National Guard and Virginia Defense Force personnel and units to support and defend the Constitution of the United States and the Constitution of the Commonwealth of Virginia. The forces must anticipate requirements and rapidly deploy where directed while executing the orders of the President of the United States and the Governor of Virginia in order to save lives, protect people and property, ensure safety and relieve suffering.

Click here for the Latest News from the Virginia National Guard